Due to COVID-19, some offers may no longer be valid or temporarily suspended. Please verify the validity (even if it says "ON TODAY" below) before heading down
It's more than three years since Elton John and Band last visited Singapore. The "Rocket Man Tour" marked a very special night here, with The Singapore Indoor Stadium completely sold out and NINE THOUSAND fans up on their feet for an unforgettable, one-night-only, three-hour rock n' roll extravaganza Singapore Indoor Stadium P12W Past Event MARINA BAY SANDS SINGAPORE AND LIVE LIMITED are now proud to announce the long-awaited return of Elton John and his highly acclaimed band back to the Singapore Indoor Stadium, this November 20th, 2011.

It has been more than three years since Elton John and Band last visited Singapore. The “Rocket Man Tour” marked a very special night here, with The Singapore Indoor Stadium completely SOLD OUT and NINE THOUSAND fans up on their feet for an unforgettable, one-night-only, three-hour rock n’ roll extravaganza.

For Elton, putting together a “Greatest Hits Tour” has always been a great passion, not least because he’ll be joined on the road once again by his long-time band; Davey Johnstone, Nigel Olsson, Bob Birch, Kim Bullard and John Mahon, All dedicated and superbly talented musicians who have been playing alongside the piano man for many years.

Another highlight for 2011 are the four backing singers, which include the incredible Rose Stone (Sly And The Family Stone) together with Lisa Stone, Tata Vega and Jean Witherspoon. Their stunning harmonies will light up every corner of the stadium this November. This will be the first time that 2CELLOS will join the ensemble. The young Croatian duo, Luka Sulic and Stjepan Hauser recently took YouTube by storm, quickly landing a recording deal with Sony Music.

Elton’s most recent studio album “The Union”, released by Universal Music in October 2010 was recorded with Elton’s long-time musical idol and world-renowned pianist and songwriter, Leon Russell. “The Union” sees the duo and a glittering array of guests get back to the nitty-gritty of what they love about rock n’ roll.

For Elton, working with Russell had been a life-long ambition. “When I started, he was my idol, mentor and everything I wanted to be as a song-writer.” says Elton. “In the last third of my life, I want to make records that I really want to make.”

To mark over forty years of chart topping success, Universal Music Singapore will be re-launching Elton’s entire music catalogue on CD and DVD, as well as digital downloads via online music stores.

Over his 40 year career, Elton John has won an impressive 5 Grammy Awards, he has sold over 250 million albums worldwide and continues to perform more than 100 shows a year, placing him squarely among the top 10 best-selling artists

in music history. In addition to being the most successful rock pianist in the world, he oversees an artist-management company. And his AIDS foundation has raised more than US$220 million since 1992 and benefits programs in 55 countries. The sales of the song “Candle In The Wind” in 1997 raised over US$40 million for the charity, following the death of his friend Diana, Princess of Wales.

The next few months in Elton’s diary are packed and include sixteen nights performing his brand new show “Million Dollar Piano” at The Colosseum, Caesars Palace in Las Vegas.

“Saturday Night’s Alright (for Fighting)”, “Rocket Man”, “Levon” and “Your Song” are just a handful of hits we can look forward to hearing here in Singapore this November – it’s sure to be another unforgettable night of music.

Don’t miss this One-Night-Only opportunity to hear one of the world’s greatest performers when Elton John and his band return with the Greatest Hits Tour this November. Tickets are on sale from today, Monday 29th August via Sistic. 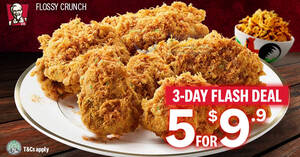 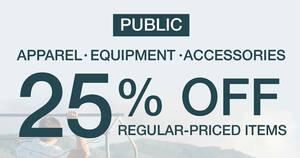 The North Face: 25% OFF on all regular-priced apparels, equipment and accessories till 23 August 2020 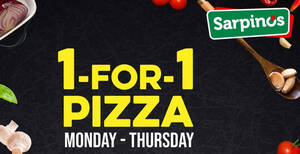 Sarpino’s: Buy-1-get-1-free pizzas of all sizes (except personal) from Mondays to Thursdays 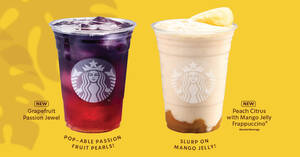